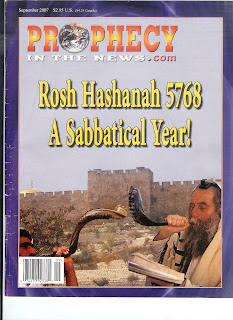 America divides her years into units of ten, called decades, but the Hebrews of the Bible divided their units of time into seven-year-periods. The last year of each seven-year cycle is/was called the Sabbatical Year, and the year 2007 (Hebrew year of 5768) was a Sabbatical Year, ending a cycle on Rosh Hashanah--The Feast of  Trumpets on September 29, 2008. On that same day, September 29, 2008, a new cycle began, and according the J. R. Church of Prophecy in the News magazine, it is widespread among the Jews that the coming Messiah will arrive in a Sabbatical year.
However, nobody knows when the last seven years on earth will begin or end. Nobody knows when the Messiah of Israel will arrive. But as Christians, we believe that Jesus (called Yeshua in Hebrew) is the Messiah and that he will return to earth very soon—not as second in command behind the 12th Imam but as Kings of Kings and Lord of Lords.
The law of the Sabbatical Year was given to Moses in 1491 BC. (See the Book of Leviticus chapter 25 and verses 1 to 5.)  The Hebrews (also called the Children of Israel) were told in Leviticus to plant and prune their crops during the six year period, but that the seventh year of each cycle was to be a Sabbath Rest for the land, and they were not to sow their fields or prune their vineyards during a Sabbatical Year.  Perhaps this was God’s way of restoring nutrition to the soil and avoiding the use of fertilizers.
As mentioned above, the current Sabbatical Year began on the Feast of Trumpets on September 29, 2008, and Americans held a national election two months later. The next national election is scheduled for November 2012, and the current seven-year cycle will end on The Feast of Trumpets—September 13, 2015. According to J.R. Church, the Sabbatical Year of the current cycle begins on the Feast of Trumpets 2014 and ends on the Feast of Trumpets 2015. And a new cycle will begin on September 13, 2015.
J.R. Church also states that Pastor Mark Biltz was interested in the signs in heaven mentioned in the Bible that heralded the Second Coming of Jesus Christ, and Biltz went on a US Government website to see if he could find any significant lunar or solar eclipses in the upcoming Sabbatical Year. Amazingly, he found four lunar eclipses and two solar eclipses in that one year.  Not only that, each of those eclipses will arrive on one of the Feasts of Israel.
The four lunar eclipses will arrive on:
Passover, April 15, 2014
The Feast of Tabernacles, October 8, 2014
Passover, April 4, 2015
The Feast of Tabernacles, September 28, 2015
Two Solar eclipses:
Adar 29/Nisan 1, March 20, 2015
The Feast of Trumpets, September 13, 2015
I would love to hear what you think about this article. Please leave a comment and let your voice be heard.
The information found in this article came from the September 2007 and May 2008 issues of Prophecy in the News, a magazine published by Prophecy in the News ministry.  www.prophecyinthenews.com To learn more about the Feasts of Israel, see the Book of Leviticus, chapter 23.
Posted by Molly Noble Bull at 5:58 PM

Even sinners are seeing Bible prophecy is coming to fruition. Thanks for the post. Time for Christians to wake up. Christ is coming soon. Exciting times, and yes, a little scary.

So sorry to hear about J.R. Church.

It's interesting from time to time to read about the "signs" of this age, but I just have to remind myself that even Yeshua doesn't know the day or hour of His return--only that He can't wait to gather His Bride! Besides, there's so much we must do to share His Good News! :o)

Nobody knows the day or the hour. We just need to be sure we're ready when Christ returns...

Right, we don't know the day or the hour. But we do know the seasons.
So, keep looking up.
Love,
Molly

Interesting post, Molly. The most important thing to do is hold fast to our faith in Jesus and know He's the only way to eternal life. We don't know when He'll come. All we know is that He will, and we need to be ready.

Yes, Debby. The Lord is in control.
Love,
Molly

Thanks, Katy and everybody for writing. There is a DVD you can order from Prophecy in the News by the guy who discovered the eclipses. He says that everything God does happens on one of the Feasts of Israel, and the coming eclises certainly do. (Leviticus 23)
The title of the DVD is The Feasts of the Lord. If these things interest you, you should order the DVD. You will be glad you did.
Love,
Molly

Thanks again, everybody. And please keep praying for JR Church.
Love,
Molly

Franklin's warning of coming persecution of Christians echoes what his mother Ruth and father Billy have clearly stated. Re Ruth, see search engines including Google for "Letter from Mrs. Billy Graham." To see what Billy has written, Google "Famous Rapture Watchers - Addendum."
Since Franklin blamed the Obama administration for his own National Day of Prayer snub and persecution, and since he accused "Christian" Barack Hussein Obama of "giving Islam a pass," readers can get some rare insights into Obama and his fellow travelers by Googling and Yahooing "Obama Fulfilling the Bible," "Michelle Obama's Allah-day," "Obama Supports Public Depravity," "Prof. F. N. Lee's ISLAM IN THE BIBLE (PDF)," "Mikey Weinstein, Jesus-Basher," and "Sandra Bernhard, Larry David, Kathy Griffin, Bill Maher, Joan Rivers, Sarah Silverman."
For a rare look at the 181-year-old endtime belief which has long neutralized millions of American patriots by promising them an “imminent rapture” off earth – which has diverted them away from being prepared to stand against all enemies, domestic as well as foreign – Google “Pretrib Rapture Dishonesty,” "Famous Rapture Watchers," “Pretrib Rapture Diehards,” “Edward Irving is Unnerving,” “Pretrib Rapture Secrecy,” and “Pretrib Rapture – Hidden Facts” – all by the author of the bestselling nonfiction book “The Rapture Plot” (the most accurate documentation on the pretrib rapture’s long hidden but recently uncovered birth in Britain in 1830 – see Armageddon Books). Also Google “Stamping Out Harold Camping.”

Thanks for stopping by Annie and for giving us a "heads up" on those web sites.
JR Church died on March 22, 2011, and I will miss his interesting article on Bible prophecy. But I know JR is with the Lord and that all believers will him again.
Love,
Molly