When the Cowboy Rides Away, my newest Christian historical-western romance, was published on Tuesday, September 15, 2015. 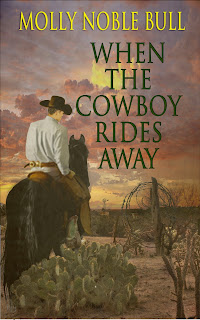 Blurb:
Maggie Gallagher, twenty-one, runs the Gallagher Ranch in South Texas, and has raised her little sister and her nephew since her parents and her older sister died. No wonder she can’t find time for romance! When the Cowboy Rides Away by Molly Noble Bull opens two years after Maggie loses her family members.
Out for a ride with her sister, Maggie discovers Alex Lancaster, a handsome cowboy, shot and seriously wounded on her land. Kind and a Christian, she nurses him back to health despite her other chores.
How could Maggie know that Alex had a secret that could break her heart?
#
The Kindle Unlimited e-book version of When the Cowboy Rides Away is available now for free to those who have Kindle Unlimited. The paperback version is also available from Amazon.

The Novel:
To read the first three chapters for free, click below.
http://www.amazon.com/gp/product/B015G99ZE6?*Version*=1&*entries*=0
#
Attention Home School Families:
Click below to learn about two study guides, one for teachers and one for students, based on When the Cowboy Rides Away and written by Jeanette Pierce. All three books are available at Amazon now, and later, everywhere.

Posted by Molly Noble Bull at 1:09 PM No comments:

Remembering that day and More

.   We got up real early on the morning of September 11, 2001 because we were going to drive from our home in the Texas Hill Country to Victoria, Texas, and it was a four hour drive. I was to have one of my knees replaced on September 12th, and we were to go to the hospital in Victoria and preregister for my surgery as an outpatient.
Before getting in the car for the long drive, I wanted to pray.
I decided to pray in tongues except I always sing in tongues instead. The Lord often deals with me through music, and according to the Bible, He likes for me, for all of us, to sing praises to Him. So as often happens, the Lord put a tune in my heart. Sometimes He gives me tunes I never heard previously, but often it is a hymn I sing in church. On September 11, 2001, God Bless America came into my mind. I thought that was odd. Though it was a song listed in our church hymnal, the Lord had never given me a patriotic song to sing at those times. I sang it anyway, and then we got in the car and started out on our journey.
About two hours later, we arrived in San Antonio, and we decided to go into a convenience store and buy snacks to eat and drink along the way. When we got back in our car, the cell phone rang. It was from one of our sons with a message. He was watching TV, and an airplane had hit a tower in New York City.
Then he said something like, “Oh no. Another plane hit another tower in New York City.”
We were stunned. I wondered if we should continue on to Victoria. Did I want to be in surgery during World War III? But we decided to continue on.
When we arrived at the hospital in Victoria, everybody was watching TV or praying or both. I was invited to attend a prayer service on another floor, but I couldn’t. I had to stay in line to preregister for my surgery.
We stayed in a motel that night. As we were watching TV, we saw the congress of the United States go outside and stand on the steps of the Capitol building and sing a song. And what were they singing?
God Bless America.
My surgery was a success, and we saw a lot of posters with God Bless America written on them in the weeks and months to follow. Then the posters disappeared, and everything returned to the way it was before 9-11.
#
On Sunday, September 13, 2015, there will be a partial solar-eclipse. Many believe that a solar-eclipse is a message from God for the entire world. Sunday, September 13th, is Elul 29 on the Jewish calendar, and many believe that there will be some kind of financial crisis on or near that date. If that was not enough, Monday--September 14, 2015, is Rosh Hashanah, (Feast of Trumpets) the Jewish New Year, and some call it the Time of Jacob's Trouble.
A lot of new things are happening in the Month of September.
Stay Tuned.

Posted by Molly Noble Bull at 10:43 AM No comments: